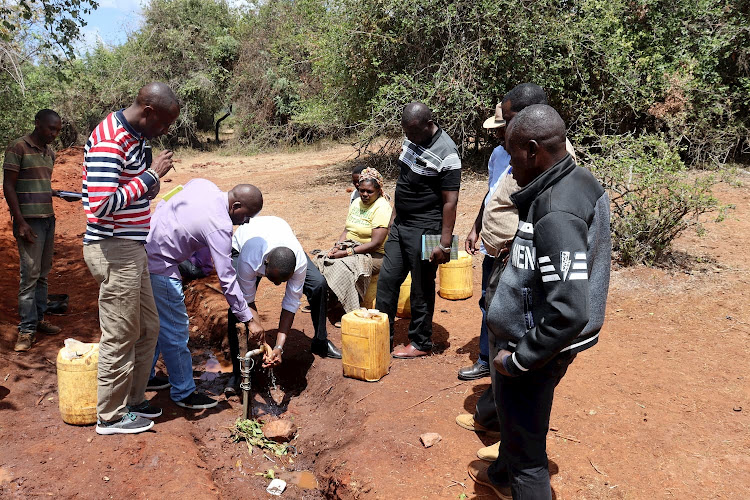 The Narok Water and Sewerage Services Company has revised water tariffs to eliminate the Sh420 monthly fixed charge, which customers have not been happy about.

The adjustment was approved by the Water Service Regulatory Board.

The move comes after the water firm held a public consultation meeting in Narok town for its Regular Tariff Adjustment.

Members of the public welcomed the changes, which will be effected after the tariffs are gazetted.

“Today, we have agreed with all the stakeholders that they pay on water usage. If you have consumed zero, you wouldn’t pay anything. You will only be required to pay for what you have used,” Kuyioni said.

He said the exercise was important as it gives powers of self-governance to the people.

“Public participation seeks to ensure that the public, communities and organisations affected by a decision have a right to be consulted and involved in the decision and that public views are taken into consideration in decision-making,” he said.

“This in turn promotes sustainable decisions that recognise the needs and interests of all participants including decision makers.”

“In the current tariff, a fixed charge of Sh420 is imposed on our customers. In the proposed tariff, customers will pay as per the amount of water consumed,” he said.

The MD also said the tariff will include sewerage services.

“The current tariff excludes sewer services and we believe the proposed one will be able to support and sustain the sewer project which was recently completed,” he said.

Environment, Water and Natural Resources executive Job Kiyiapi said the population in town was steadily increasing, hence the need to adjust the tariffs to favour all the urban dwellers.

He said the step was aimed at curbing increased cases of non-revenue water caused by leakages or consumers vandalising water meters to favour them.

Kiyiapi said once the new tariffs are gazetted, adjusting anything would be difficult.

He said the company is in the process of automating the meter reading process, so consumers can access their consumption rate on their mobile phones.

Kiyiapi said they will conduct a crackdown on fake meters and ensure the culprits are taken to court.

Thwake Multipurpose dam to be ready by June

Joy as residents of Manera, Naivasha’s oldest slum get piped water after 40 years

Thwake Multipurpose dam to be ready by June

Joy as residents of Manera, Naivasha’s oldest slum get piped water after 40 years

At WEQS, we believe in customer satisfaction

This website uses cookies to improve your experience. We'll assume you're ok with this, but you can opt-out if you wish. Accept Read More